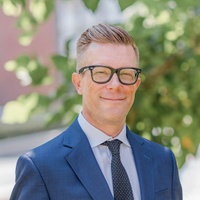 Scott began his career with John Stokes Financial in 2010. Scott gained extensive experience in his previous role as a financial advisor and now, choose to become the firms para planner. He supports our advisory team by creating financial plans through our online wealth management tool, Your Financial Compass™. He holds the Series 7 securities registration and has completed several certificate programs in Information Technology from Saddleback College. Scott also attended The Art Institute of Philadelphia for Graphic Design.

Scott recently relocated back to the United States from Switzerland.  He is a competitive cyclist for over 40 years with both state and national titles. His most memorable charity ride was the “Freedom Ride,” a 15 day tour from Bend, Oregon to Newport Beach, California to raise awareness to fight human trafficking.  Additionally, Scott enjoys art, photography, off-roading in his Jeep, and spending time with his dog, Tommie G.